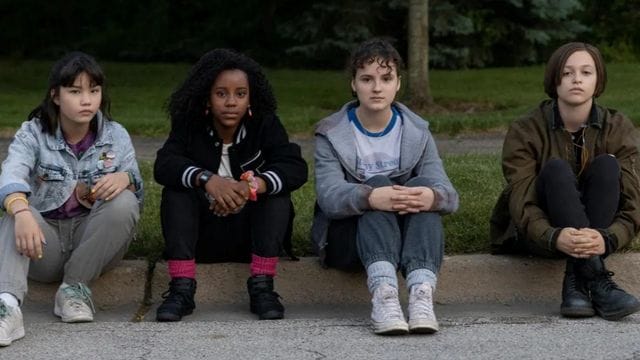 The series is an adaptation of the 30-volume comic book of the same name that was written and drawn by Brian K. Vaughan. It tells the story of a paper route that goes terribly wrong.

Tiff, Erin, Mac, and KJ are delivering papers on Halloween in 1988; however, they find themselves stranded in 2019 and in the middle of a time war between two time-traveling factions that are at odds with one another: the Old Watch and the STF Underground.

The Old Watch, which is an organisation that is led by the Grand Father and will stop at nothing to protect the current timeline, is in opposition to the STF Underground, which wants to alter the timeline.

However, season 1 pretty much covered all of the major plot points of the original comic series, and it also left us with a game-changing twist: that Tiffany is set to discover time travel in the future and establish the Quiklin Institute.

Normally, we can rely on the comics to give us an idea of where the story is going next; however, season 1 pretty much covered all of the major plot points of the original comic series.

It is hinted in the final episode of the first season that the girls are caught in a time loop, which means that the future will unfold in a predetermined manner regardless of what actions they take to try to alter it.

However, Mac is going to have cancer in the future, so she and KJ are going to do all it takes to attempt to reverse her tragic fate. They are not going to let anything stand in their way.

The Prioress’ (Adina Porter) fate remains unclear, despite Erin’s best efforts to save her from the Grand Father’s (Jason Mantzoukas) hands after she betrays him. A second season of Paper Girls might reveal that we haven’t seen the last of her, though, since time travel is a major plot point.

Some major players from the STF Underground and that pesky Old Watch, along with the central quartet and Adult Erin (Ali Wong), are almost certain to show up.

If Season 2 gets the go, here is a comprehensive list of potential cast members to consider before any official announcements are made. Paper Girls’ entire first season is currently streaming in its entirety on Amazon Prime Video. Our list of the top time travel films may also satisfy your cravings for time travel-themed entertainment.

Not good Attention, Paper Girls devotees: Amazon Prime Video has decided not to order a second season of the show. Deadline reports that Legendary TV, who co-produced the series with Amazon, is shopping the series across different networks and streamers; if they are successful, we will let you know. This makes the possibility of a second season less likely, but not impossible.

Read More:-Sakamoto Days Chapter 94 Release Date: When Will It Be Released?

Read More:-I Can See Your Voice Season 2 Release Date: What is Alison Hammond&#8217;s Verdict on This Series?

The first season was shot over the course of five months, from May to October of 2021. After filming wrapped, the show didn’t premiere for another eight months, most likely due to post-production delays.

Keeping in mind that another network picking up Paper Girls season 2 wouldn’t air the new episodes until the fall or winter of 2023 at the earliest, we can estimate that we won’t see it until at least April of 2024.

AN 89% APPROVAL RATING FROM THE AUDIENCE. The Typical Rating is 4.5 out of 5 Stars.

I've been an editor in this business for more than a year. I provide cobblehillblog.com with reviews, counseling, freelance copywriting, creative proofreading, and writing services.

Darius Jackson Net Worth: How old is He?