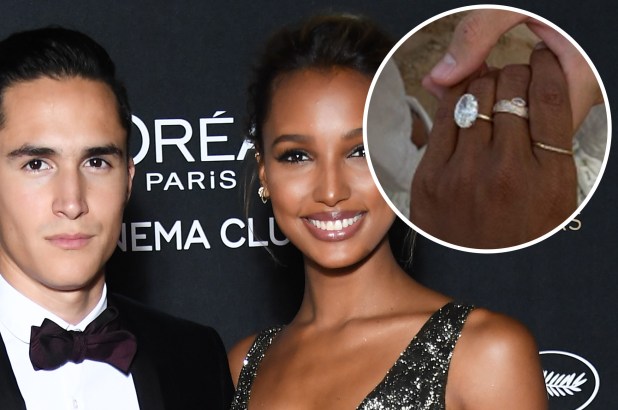 Jasmine Tookes’ Engagement Ring is Probably Valued At Over $250,000

The eye-catching engagement ring of Tookes is believed to be a made to order from Ritani. According to People, the rock crowning on Jasmine Tookes finger is a 7-carat oval cut diamond. The jewel is braced on an 18 karat yellow gold ring with a hidden radiance and diamond elaborated pointers. The ring is presumably valued at above $250,000.

Juan David Borrero and Jasmine Tookes have been dating each other since 2016. According to Vogue, Borrero flew way Tookes on a surprise trip to Utah this week. However, he proposed his lady love with a twist. Borrero wrote “WYMM” with stones on a group of big rocks. While Tookes pondered over what “WYMM”, the short form of “will you marry me” would mean, the fantasy proposal took a high tech twirl.

Jasmine Tookes revealed to Vogue that while she was contemplating what the letters meant, she heard a drone flying overhead. Furthermore, the drone handed over the ring to Borrero in a unique way. It had a string drooping with a small black pouch under it, containing the ring.

As the device came nearby, Borrero pulled the box out of the pouch and went down his knees. Completely shocked and unexpected, Tookes burst out crying happily and said yes immediately. She told Vogue that it was unimaginably the best day of her life.

Tookes And Borrero Are Getting Married In Ecuador though the date of the wedding has not been revealed yet, Jasmine Tookes and Juan David Borrero are getting married in the groom’s native place in Ecuador.

Although, everybody is waiting eagerly to see whether the couple’s comrade fellow model and Snapchat executive couple Miranda Kerr and Evan Spiegel will be the maid of honor and best man at their wedding or not.

A beginner in the world of content writing, working hard to be an expert. I am a voracious reader and writer. Books, blogs, and posts of any genre in both print and digital media interest me; be it food, technology, travel, nature, wildlife, crime-thriller, romantic comedy, music, sports, or fashion. I am a foodie by heart and a self-proclaimed amateur wildlife photographer and cook.