The Pro Football Hall of Fame declared on Wednesday morning. About the demise of Gale Sayers. The legendary player who played for Chicago Bears way back in the 70s. The celestial abode of the player confirmed by his grandson brought a rush of misery in the world of sports. The family confirms the cause of his death to be a long battle with Dementia and other age-related ailments. But the exact causes have not yet been released. 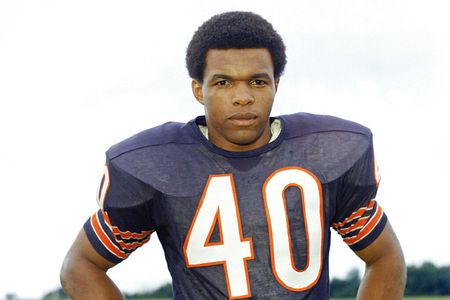 Gayle was a professional football player, who started his career in the early ’70s. Nicknamed as Kansas Comet. He was a tough player. He was well renowned for his quickness and steady attitude. Although he had a brief but rememberable career. He just played 68 matches in NFL but holds lots of records on his name. Spending seven seasons for Chicago Bears from 1965-1971. He became the most popular player among them.

Despite only playing in 68 career games due to various injuries, he holds one of the biggest running backs of all time. Also, he was inducted into the Hall of Fame as the youngest player ever. Although Sayers’ career was brief, his impact on the team and football as a whole extended far beyond 1965-1971. He scored 22 touchdowns and was honored with Rookie of the year in 1965. Six out of those were in a single game. 4,956 yards and 56 career touchdowns were what he achieved in his 7-year career. In 1972, as the all-time leader in kickoff return yards, he retired from the NFL. In 1977, by becoming the youngest player ever to be inducted into the Pro Football Hall of Fame.

Good Player with a Good Heart

He is not just being remembered for his play tactics but also for his humble and humane nature and especially for the friendship he did for the lifetime with Brian Piccolo. After becoming an All-Pro player in 1968 then after a knee injury, winning the league’s rushing title in 1969, He was seen helping his fellow player who battled with cancer at that time. He was none other than Brian Piccolo. These friends never left each other in any ups and downs of life. Even “In Sayer‘s autobiography” I Am Third, “friendship was recorded and later made into the Emmy Award-winning television film” Brian’s Song.
Sayers appeared at the centennial celebration of the Bears, where he got a standing-
the ovation from the audience, prior to actually his demise and while his wellbeing was dwindling. We wish the legend peace for his celestial residence and condolences to the family.

Content writer at CHB. I write content for technology, entertainment. politics and other current issues. Writing is the best way, which can express myself. Do follow us for more happening news of the world.